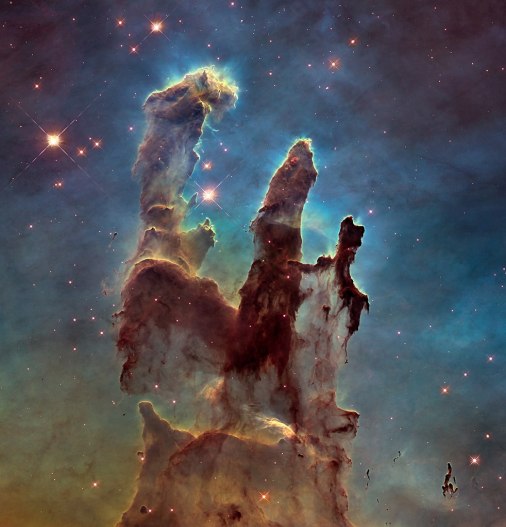 Secrets of creation hide deep in conflation
Of science with faith, of corpus with wraith,
Discrete bits of essence, immune from senescence,
That mark each warm creature, or cold lifeless feature,
Of all the known world, plus those unknown, thus hurled
Through vastness of space, push-pulled in their chase
By grave forces, unseen, save by eyes utmost keen
As detectors of naught, who find nothingness caught
By the physics of sleight, in mathematical light,
Racing outward, away from a focal array,
From a radiant heart that outburst apart
With the first stroke of time, Divine in its prime.

Before that release, all was soundless still peace,
When all matter, all dust, was consigned to the trust
Of that heart, then mere speck, the one salient check
Against stark eternity, charged with modernity,
Then, slowly it swelled, its inertia unquelled,
Now a tumescent part that grew into that heart
Whose eruption destroyed the limitless void,
And sent forth material, mixed with ethereal
Substance that surged, until order emerged
That conformed to base laws, posed by God as first cause,
And the cosmos took form in a most perfect storm
Whose primordial strife gave way to first life.